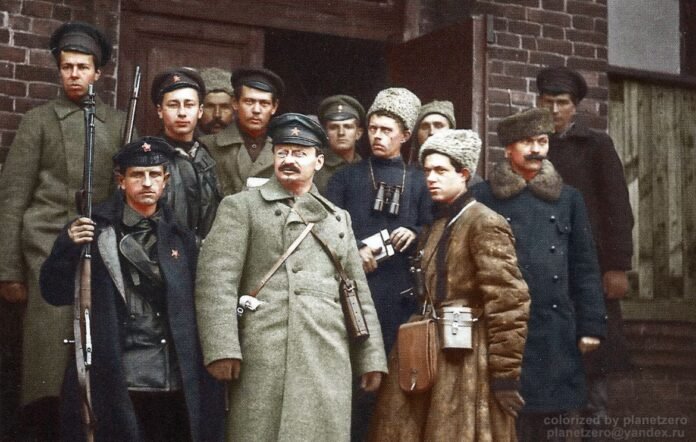 When the IWL-FI began its rebuilding process in 1995, it retook the strategy posed in its founding: the rebuilding of the Fourth International.
At the time, just as in the 1982 Foundational Congress, we said we set on to carry out this task not only with “Trotskyists”, or with those who claimed to follow Trotsky. We sustain this definition today. It is closely related the Trotsky’s objective with the foundation of the Fourth, and the current situation of the “Trotskyist movement”.
By Alicia Sagra.

The building of the Fourth was not an improvised decision

Trotsky spent 10 years developing a strong fight for the recovery of the Bolshevik party and the Third International, of the degenerative process led by Stalin. This battle took place within the USSR and abroad after his expulsion from the country.
The growing advance of bureaucratic degeneration had objective bases. Among them the separation of the working class from the functions in office, due to the civil war and the demoralization due to the defeat of the 1923 German revolution. Other elements were the extermination of part of the vanguard in the civil war, the Russian backwardness, which could not be compensated when the German Revolution did not triumph, and Lenin’s death, the undisputed leader.
Therefore, despite Trotsky being the only leader with popularity within the party that approached Lenin, despite being acknowledged as the great political-military articulator of the triumph of the civil war, he was defeated in this battle.
He won over to his standings great leaders of the party.[1] As the North American Trotskyist, David Frankel said, “if the main factor of the struggle were in political skills and successes achieved by those composing the two fractions, the opposition would have easily won.”[2]
However, the influence was defined by the influence of the apparatus. As the date of the XIII Congress of the party approached, this influence was clear. The names of those who spoke in the name of the opposition were listed and they were threatened with the loss of jobs or transfer to isolated regions.
Despite this, in the district conferences of Moscow, the Left Opposition led by Trotsky had 36% of the delegates. However, the apparatus was felt in the faraway regions. The result was that in the January 1924 Congress, the opposition had 3 out of 218 delegates.
It was an overwhelming defeat and it generated deep changes in the regime. S.I. Gusiev, the new member of the Control Commission explained the changes, “The authority is achieved not just through work, but through fear. Now, the Control Commission and the Inspection of Workers and Peasants has succeeded in imposing fear. In this regard, their authority is growing.”
From this defeat, Trotsky bet that the triumph of world revolution would enable a change. In 1925, the great second Chinese revolution took place. However, due to the disastrous policy of capitulation to the bourgeoisie promoted by Stalin from the Third International, it ended terribly crushed in 1927.
One of its consequences was the strengthening of Soviet bureaucracy and the beginning of physical persecutions. Trotsky was expelled from all his posts in the state and party and he was banished. However, he did not abandon the battle. He now focused on the recovery of the Third from the International Left Opposition.
Later on, through the mediation of Krupskaya (Lenin’s wife), Zinoviev and Kamenev joined the battle. The two old Bolsheviks who had ruled along Stalin until now. However, after the defeat of the Chinese revolution, the objective situation did not help the revolutionaries. Trotsky decided the battle was lost when in 1933, the Third International supported the German party’s policy that had led to Hitler’s triumph and the worse defeat of the German working class.
From this moment, the great object of his life became the building of the Fourth International to preserve the Leninist principles and program. To have an International based on the model of the Third, the Communist International led by Lenin, to answer to the next revolutionary ascent leading the struggle for world socialist revolution.

The Battle to rebuild the Fourth International

It was a very hard struggle. Trotsky’s first issue was with his friends, his political followers. The majority believed it was not the correct time because the objective situation was very bad. Defeats prevailed: Fascism in Italy, Nazism in Germany, and Stalinist terror imposing in the USSR. Therefore, despite Trotsky having concluded that the building of the Fourth was a need in 1933, it was only founded in 1938.
Many of Trotsky’s letters answer to these sectors. He synthesized the answers in the Transitional Program, “Skeptics ask: But has the moment for the creation of the Fourth International yet arrived? It is impossible, they say, to create an International ”artificially”; it can arise only out of great events, etc., etc. (…)The Fourth International has already arisen out of great events: the greatest defeats of the proletariat in history. The cause for these defeats is to be found in the degeneration and perfidy of the old leadership. The class struggle does not tolerate an interruption. The Third International, following the Second, is dead for purposes of revolution. Long live the Fourth International!
But has the time yet arrived to proclaim its creation? … the skeptics are not quieted down. The Fourth International, we answer, has no need of being ”proclaimed”. It exists and it fights. Is it weak? Yes, its ranks are not numerous because it is still young. They are as yet chiefly cadres. But these cadres are pledges for the future. Outside these cadres there does not exist a single revolutionary current on this planet really meriting the name. If our international be still weak in numbers, it is strong in doctrine, program, tradition, in the incomparable tempering of its cadres.”
Trotsky did not make a calling to build a new International just to his followers. He called all who broke to the left with Stalin, and with Social Democracy, like Pivert, the French leader, the German SAP (Workers Socialist Party), the OSP (Independent Socialist Party of Holland), and the RSP (the Socialist Revolutionary Party of Holland).
However, his proposal was not to join the opposition, he made a calling around a program. In 1933 he wrote, “Evidently, one cannot consider building a new International based on organizations that part from profoundly different and sometimes opposite principles. The Left Opposition took its own program to the Conference, with the objective to help in the principled separation from the reformist and centrists, and grouping the revolutionary organizations.[3]
The combat was not only of ideas. On the ideas, fascist and Stalinist terror acted, just as the reactionary policies of the Third led by Stalin.
Many were lost in this battle. Many died in concentration camps in the USSR. Others like Zinoviev, Kamenev, and Rakovski could not stand the pressure, the capitulated and were shot in the sinister Moscow processes. Those closer to Trotsky were kidnapped and murdered by Stalin’s henchmen abroad. And those won over by the People’s Front policy as a way to face fascism were politically lost, like Pivert, the SAP leaders, Victor Serge, Nin…
All this led the Fourth to be found only by “Trotskyists” in extremely weak conditions. In the Foundational Congress, on September 3, 1938, Trotsky was unable to participate because his life was in danger and the statutes were improvised because the person in charge (Rudolph Klement) had been kidnapped days before.
In any case, Trotsky considered this a “great achievement”. On August 30, 1938, he wrote, “The irreconcilably revolutionary tendency, subject to persecutions that no other political tendency has suffered in the history of the world, has proven again its power.
Overcoming all obstacles due to the blows of its powerful enemies, it summoned its International Conference. This fact constitutes an irrefutable evidence of its deep viability and the firm perseverance of the Leninist Bolshevik International.”[4]
Trotsky’s reasoning before an extremely negative objective situation was very different from the “Trotskyists” today, who in the name of an imaginary “change of epoch” or a supposed “reactionary wave” abandoned the building of the international revolutionary party and went on to build joint parties with reformists.

Continuity of the Third

During these years, great triumphs were achieved. Fascism was defeated in World War II, capitalism was expropriated in China, Cuba, and the European East, and North American imperialism was defeated in Vietnam… However, these were tactical triumphs. They did not manage to overcome the great strategic defeat: the loss of the revolutionary leadership. Stalin destroyed the Third and the Fourth did not fulfill Trotsky’s expectations of winning mass influence in the post-war ascent. On the contrary, extremely weakened after the murder of its great leader, it did not manage to overcome the difficult situation of World War II. It did not manage to work as a true centralized International and it was dispersed.
On the meantime, Stalinism was strengthened after World War II. It became the great obstacle for the development of world revolution and ended restoring capitalism around the world.
Without a doubt, history proved Trotsky’s prognostic right. The Stalinist bureaucracy was not defeated and ended restoring capitalism, proving the theory of socialism in a single country false.
However, it paid a high toll for this treason. The revolutionary processes of East Europe and the USSR put an end to the main Stalinist apparatus. Today, this great obstacle does not exist anymore. The working class and the masses around the world heroically face the capital’s attacks. Although, as Trotsky said in 1938, the crisis of humanity remains the crisis of revolutionary leadership. Therefore, the task of rebuilding this revolutionary leadership is more urgent than ever.
Just as in its foundation, we consider that the rebuilding of the Fourth is not only a task for Trotskyists. At the same time, we do not call all who claim Trotskyism to carry out the task.
As Trotsky said, an International may not be built with those who defend opposite principles. For us, the rebuilding of the Fourth only makes sense if the criteria of his founder are followed regarding programmatic, methodological and moral continuity with the Third International led by Lenin and Trotsky. The Third International of the first fourth congresses is a synonym of the restless struggle for class independence, not just to face and defeat imperialism and national bourgeoisie, but also the great internal enemy of the working class: reformism.
The “Trotskyist”, who claim the rebuilding of the Fourth but participate or support bourgeois governments and leaders, and build common parties with reformism, have nothing to do with these principles, program, method and morals.
***
Notes:
[1] For example, Eugenie Preobrazhenski, the main Bolshevik economist, a key cadre in the elaboration of planned economy. Bolshevik since 1903, he led the clandestine struggle, the revolution and the civil war in the Ural Mountains. Christian Rakovski led the first Soviet government in Ukraine. He was the Soviet ambassador in France and England. Nikolai Muralov, a Bolshevik since 1903, led the Red Guards in the assault on the Kremlin in October 1917. He commanded the military district of Moscow during the civil war. Member of the Control Commission of the party. Lev Sosnovski, one of the most outstanding Bolshevik journalists, chief of the agitation and propaganda department. Yuri Piatakov, who Lenin refers to in his testament as one of the most outstanding leaders of the new generation.
[2] FRANKEL, David, “Historia de la Oposición de Izquierda”; Our translation.
[3] Trotsky, León, Escritos, Tomo V volume 1. Our translation. He is referring to the policy with which they went to the Conference of Socialist and Communist Organizations that took place in France.
[4] Un gran logro, title of the greetings letter to the Foundational Congress. Published @ New International, October 1938. Our translation.
[5] Quoted by Pierre Broue, in the History of the Bolshevik Party. Our translation.
[6] Trotsky, León, Bolshevism and Stalinism. In: https://www.marxists.org/archive/trotsky/1937/08/stalinism.htm.
[7] Trotsky, León, Escritos, volume 3. Our translation.
[8] Trotsky. Transitional Program. In: https://www.marxists.org/archive/trotsky/1938/tp/transprogram.pdf.