The Soviet Congress and the June Demonstration 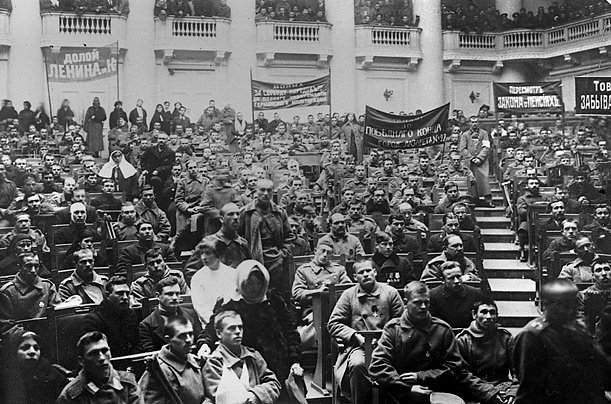 The chapter of The History of the Russian Revolution we reproduce here debates the successes of June 1917 (considering the old Russian Julian calendar). June and July were an inflection point in the accelerated revolutionary process in course.
Workers and masses that featured February revolution understood quickly that throwing down the Tsarist regime was not enough to achieve their demands (Peace, Bread, and Land); and the bourgeois provisional governments that came since February (integrated and supported by the reformist left-wing currents, like Mensheviks and Esserists) had no intention to solve that.
On the contrary, they postponed essential questions like agrarian reform and the oppression of minority nationalities by Russia. Also, regarding the hottest topic (the war), the government ordered to mobilize all Petrograd troops (capital of the country and core of the revolution) to attempt an offensive against the German Army.
This generated a state of rebellion in the rank and file of the Russian army: millions of soldiers, most of them peasants that just wanted to come back home, rejected the order to go to the front.
The First Soviets’ National Congress took place in this context, and this was the main debate. These bodies expressed, back then, a deep contradiction: on one side, they were a reference for workers and masses, and they expressed a dual power to the bourgeois government; on the other, reformist currents together still had the majority of deputies and the Soviets’ leadership. The Bolsheviks represented less than 20% of the body: they had increased their influence but they were still a minority. Thus, their proposal of rejecting the government’s military order was rejected.
But this relationship of forces was “behind” the dynamics of workers and the base of poor soldiers and peasants that were increasingly turning to the left. And such “backwardness” was even higher in Petrograd, where the Bolsheviks were already the strongest tendency.
This is the frame of the facts analyzed by Trotsky in this chapter: the canceled demonstration of June 10, the Soviet’s delegations to factories and workers’ neighborhoods of the capital, and the unified demonstration called by the Soviet on June 18 (when the Bolsheviks’ policy was overwhelmingly majoritarian).
For the bourgeoisie, it was clear that the enemies were the Bolsheviks, and so it states publically. The reformist currents followed the same line, repeating the attacks and almost the same words: “the Bolsheviks are the main enemies of the revolution.” (So, the main enemy of the bourgeois State and the construction of a political regime to its service.)
Such as Trotsky said, “There was no direct clash then. But a clash was not to be avoided. It had only been postponed for two weeks.” The revolution was fastening its pace, and violent clashes would take place along the next months, practically uninterrupted, to finally end with the October Revolution, in which the Bolsheviks defeated not only the bourgeoisie but also its “left-wing agents”.
In a balance of June events, Lenin wrote something that could be used in the present just by changing the name of the currents:
“This universal wild cry of spite and rage against the Bolsheviks is the common complaint of Kadets, Social Revolutionaries, and Mensheviks against their own flabbiness. They are in a majority. They are the government. They are all together in a bloc. And they see that nothing comes of it. What can they do but rage against the Bolsheviks?”
**
The Soviet Congress and the June Demonstration
Leon Trotsky – The History of the Russian Revolution – Chapter 22