Last weekend’s G20 summit in Osaka resolved nothing substantial in the ongoing trade and technology war that the US is now waging with China. At best, a truce was agreed on any further escalation in tariffs and other measures against Chinese tech companies.  But there was no long-lasting agreement reached.  And that’s because this is a ‘cold war’ between a relatively declining economic power in the US and a new and dangerous rival for economic supremacy, China.  Just like the last ‘cold war’ between the US and the USSR, it could last a generation or more before a winner emerges – and the odds are against the US this time, the longer the cold war lasts.

At the G20, Trump and Xi agreed a truce on existing tit-for-tat measures and will renew ‘negotiations’.  Trump made a few concessions, allowing US companies to resume selling products to Huawei. So, presumably, Google, Android etc. will reappear on Huawei devices.  And China will be able, presumably, to buy the processors and chips it needs from Intel, Qualcom and Micron.  But there was no clarity on whether these concessions include what Huawei can sell to US companies (i.e. 5G networks).

But as sure as night follows day, the trade war will resume at some point, because the US’ key demands are just unacceptable to China, namely that China relinquish its drive to match US technology and agree to accept US supervision of its economic affairs.

The G20 may offer a brief respite for financial markets, but it will not alter the general downturn that the world economy is now experiencing, with the likelihood of a new slump in global production, trade and investment getting ever closer.  Already global activity indexes in both manufacturing and so-called services sectors have slowed to levels not seen since the end of the Great Recession in 2009. 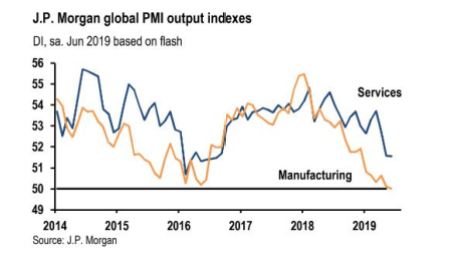 As of June, the JP Morgan global activity index suggests that world economic growth is down to a 2.5% annual rate – a figure often considered at the threshold of ‘stall speed’ ie anything below that rate would slip into a global recession. 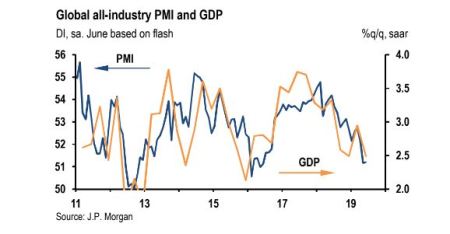 The reality is that Trump cannot reverse the steady decline in America’s former manufacturing prowess and now China’s challenge to its technological superiority.  Manufacturing employment in the US has fallen from around a quarter of the workforce in 1970 to 9% in 2015.  This decline was not due to nasty foreigners cheating on trade deals, as Trump likes to argue.  Most studies (not all) dismiss that thesis.  A study by Autor et al reckons competition from China led to the loss of 985,000 manufacturing jobs between 1999 and 2011. That’s less than a fifth of the absolute loss of manufacturing jobs over that period and a quite small share of the long-term manufacturing decline.

The biggest reason Trump can’t bring back home these manufacturing jobs is because they have been lost in large part to the success of ‘efficiency’ in the US  Over the past three-and-a-half decades, manufacturers have shed more than seven million jobs while producing more stuff than ever. The Economic Policy Institute (EPI) reported in The Manufacturing Footprint and the Importance of U.S. Manufacturing Jobs that “If you try to understand how so many jobs have disappeared, the answer that you come up with over and over again in the data is that it’s not trade that caused that — it’s primarily technology,”…Eighty percent of lost jobs were not replaced by workers in China, but by machines and automation. That is the first problem if you slap on tariffs. What you discover is that American companies are likely to replace its more expensive workers with machines.”

What these studies reveal is what Marxist economics could have told them many times before.  Under capitalism, increased productivity of labour comes through mechanisation and labour shedding i.e. reducing labour costs. Marx explained in Capital that this is one of the key features in capitalist accumulation – the capital-bias of technology – something continually ignored by mainstream economics, until now it seems.

Marx put it differently to the mainstream.  Investment under capitalism takes place for profit only, not to raise output or productivity as such.  If profit cannot be sufficiently raised through more labour hours (more workers and longer hours) or by intensifying efforts (speed and energy – time and motion), then the productivity of labour can only be increased by better technology.  So, in Marxist terms, the organic composition of capital (the value of machinery and plant relative to the number of workers) must rise secularly.

Against the view of mainstream ‘free market’ economics, historically, it has been government spending that has underpinned the development of unproven technologies.  This has usually occurred under duress, with innovation during war a notable driver of development, leading to breakthroughs in materials, products and processes.  The commercialisation of the jet engine, rocket motors, radar and modern computing can all trace their emergence back to World War 2 while the Cold War and the space race developed these to the point that launched the current technology age in the 1990s.

The space race was important as both sides in the cold war put to work their newly-acquired German scientists and engineers to drive forward their rocket projects.  This culminated with President Kennedy’s Apollo programme.  The US having been beaten by the Soviets to the first man into space, reacted by devoting immense resources to catching up.  The space race at its peak involved nearly 400,000 people and drew in 20,000 private industrial firms and universities.  Not only did the mission itself throw off numerous innovations — much of the technology needed to get to the moon did not exist when the programme was announced — but it created clusters of new high-tech industries across the US, building on the networks that had begun to emerge during the war.

This accelerated the development of numerous computing technologies, including the integrated circuit, mass data transfer and systems software.  These were the breakthrough technologies that drove IBM and HP’s development into computing giants.  Other engineers from the programme went on to found Intel and numerous other tech stalwarts.  Without Apollo, it’s unlikely that Silicon Valley would have developed into the tech and economic powerhouse taken for granted today.  Apollo also drove broader business innovations, including things that consultants have lived off ever since, like strategic planning, budgeting as well as new management and enhanced decision-making processes.

But as profitability in the capitalist sector fell from the mid-1960s to the early 1980s, government taxation was reduced and so spending, especially state investment, was slashed.  Technical advances in America increasingly depended on private sector innovation.  But for the most part that was not forthcoming.  America’s capitalist sector, like others in the major economies, opted to relocate more of their production overseas in search of cheap labour and then in turn export back to the US.  That was expressed in investment in Latin America (especially Mexico) and later into China. 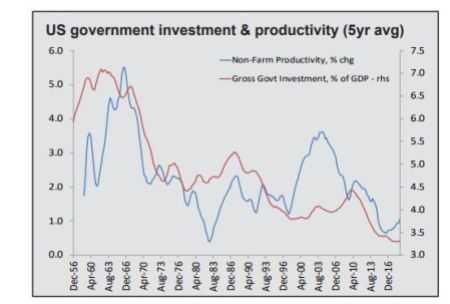 There was one exception – the US hi-tech sector.  US technological advances are now completely dependent on investment in this sector.  Everything in the US now depends on the FAANGs (Facebook, Apple, Alphabet, Netflix and Google) plus Microsoft.  Just these few companies invest a staggering 80% when measured against a share of US government spending on education, transport, science, space and technology.  The scale of this expenditure dwarfs endeavours like the decade-long Apollo programme, where spending came in at approximately $150bn in today’s dollars — less than two years of current FAANGs plus Microsoft’s total investment expenditure. 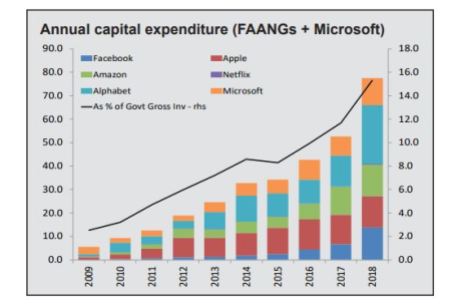 The US hi-tech sector is the last bastion of America’s productive superiority. Investment bank Goldman Sachs has noted that, since 2010, the only place globally where corporate earnings have expanded is in the US.  And this, according to Goldmans, is entirely down to the super-tech companies.  Global profits ex technology are only moderately higher than they were prior to the financial crisis, while technology profits have moved sharply upwards (mainly reflecting the impact of large US technology companies).

If China is eventually able to compete with the FAANGS, then the profitability of capital in the US will take a big shift downwards, and with it, US investment, employment and incomes over the next decade.  That is at the heart of the trade and technology war and why it will continue.

The views expressed in this article are the author’s own and do not necessarily reflect IWL-FI editorial stance.

The G20 and the cold war in technology

The Gravity of a Possible New World Recession

Italian Workers On Strike Against Profit Over People

Halt Brazil to stop the coronavirus

Italian Workers On Strike Against Profit Over People

Halt Brazil to stop the coronavirus

We are a Leninist international that defends a revolutionary and socialist programme. Parties in different countries are part of our International, also on the base of a workers' socialist programme. Our strategic project is to reconstruct the Fourth International founded by Leon Trotsky in 1938, because we consider it an indispensable tool to struggle for a worldwide socialist revolution.
Contact us: english@litci.org
© Webdesigner - desenvolvedor@litci.org