Social Media Solidarity With Strikers Will Cost You Your Job, Honda Tells Workers 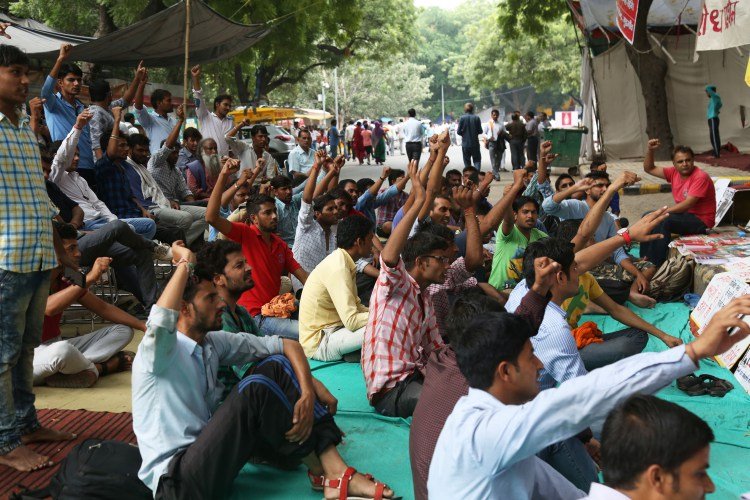 Rising concerns over the growing support for the hunger strike led by workers of Honda Motorcycle and Scooter India (HMSI) from Tapukara, Rajasthan, has led the management of the company to warn its current employees against using social media to support the workers’ protest.

Vijender Kumar, a permanent worker at the Tapukara plant who had ‘liked’ some photos of the protest posted on Facebook, was indefinitely suspended on September 24 by the management for expressing his support for the hunger strike. This tactic mirrors similar attempts made by political parties, the police and universities to crack down on free speech in various parts of the country.

Workers claim that Honda has also posted notifications at the plant and issued warning letters to take disciplinary action against employees who use social media to incite unrest or demonstrate solidarity with the nearly 2,500 workers whose employment has been terminated since February.

In the meantime, taking a respite from the late-summer heat, workers of HMSI – on their ninth day of an indefinite hunger strike – lay down to conserve their energy at Jantar Mantar.

ince the strike began on September 19, each day, activists, students and workers have been participating in a relay hunger strike as well. On Tuesday, four workers from Maruti plants in Manesar and Gurgaon fasted in order to demonstrate their support for the Honda employees.

Honda workers came to Delhi to protest the mismanagement and exploitative working conditions of the contract labour at the Honda factory in Tapukara in Rajasthan.

Over 100 permanent workers and nearly 2,500 contract workers, who were terminated, are still waiting for the company to reinstate them.

Contract and permanent workers at the Tapukara plant came together to file a petition to unionise on August 6, 2015. A stay order has been issued against their union, while workers claim that the HMSI Karamchari Union, formed by a few workers in alliance with the Honda management, was approved within a month in May of this year. The HMSI Karamchari Union was created with the support of Bharatiya Mazdoor Sangh, a group affiliated to the RSS.

Several workers, students and activists like Binayak Sen, documentary filmmaker Rahul Roy, trade union leaders like Amarjeet Kaur and Vidya Sagar Giri of All India Trade Union Congress (AITUC), Sanjay Singhvi of Trade Union Centre of India and Ram Nivas of Mazdoor Sahyog Kendra, were present over the past week to express their solidarity with the Honda workers.

Jignesh Mevani of the Una Dalit Atyachar Ladhai Samiti, also held a meeting with the workers over the weekend.

Vipin Paul – one of the five Honda workers on hunger strike – fell unconscious on the morning of September 26 and refused treatment when he was taken to the hospital.

“What will happen to my friends protesting here if I break my fast?” he said.

Although there has been no response from the Honda management about reinstating the terminated workers or dropping charges against the accused, Paul says that he is hoping for a positive result in the coming days.

Over 100 employees also arrived in Delhi over the weekend to join a candlelight vigil held for Anil Jakhad, a terminated Honda employee who died in a bike accident in Haryana on September 18.

Naresh Mehta, president of the Honda Motorcycle and Scooter 2F Kamgar Union, announced a boycott of all Honda products on the first day of the strike, which went into effect yesterday. Teams of workers and activists have been protesting against the purchase of Honda products outside automobile dealerships, railway stations and bus stops across Delhi.

Rajpal, a terminated permanent employee, said that Honda’s products have defects because of the employment of new contract workers who lack proper training.

Support continues to pour in for the strike. From Wednesday onwards, leaders of other automobile unions such as Maruti Manesar, Maruti Gurgaon, Suzuki Bikes and Munjal Showa, along with trade unions like AITUC, Centre of Indian Trade Unions and Indian National Trade Union Congress will participate in a four-day march from Dharuhera in Haryana to Jantar Mantar.

The families of Honda workers will also arrive on October 2, after which they will continue to boycott Honda products in teams across the city.

Meanwhile, workers have appealed to labour minister Bandaru Dattatreya to resolve the issue. A Honda worker said the minister would forward their memorandum of demands to his officer on special duty for further inquiry into the matter.