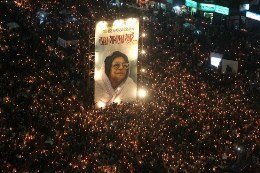 The ongoing protests began on 5th of February. The people were out demanding death sentence for all war criminals. The war criminals were those charged with crimes against humanity during the revolutionary liberation war of Bangladesh in 1971, they are popularly called ‘Rajakars’ who betrayed their motherland and sided with the US aided Pakistan army in suppressing the fight for freedom.

Their methods were vile and brutal! They engaged in wanton killings of the civilian population, they would depopulate entire villages, and brutalize their victims. One very popular tactic employed by this army of reaction was to dump dead bodies in rivers to block transport of guerrilla troops through rivers. Till now, many are reported missing whose bodies have not yet been recovered. The Rajakars reveled in the rape of women and used this vile form of sexual oppression as a weapon of psychological warfare. Minorities would be singled out for rape and genocide. In the course of the liberation struggle it is believed that almost 3 million were killed.

For 42 years the anger and indignation of the people of Bangladesh remain dormant, but now they have risen! The present round of protests started with the judgment of Kader Mollah (popularly known as the butcher of Mirpur) which reduced his charge from that of death penalty to life imprisonment. Kader Mollah was found guilty of killing 352 people in Mirpur, raping women and in three other charges.

{module Propaganda 30 anos – MORAL}Despite the weight of his crimes, he was still given the relatively light sentence of life imprisonment. It was then that the people of Bangladesh came to the street to demand justice! At first the protests were small, drawing only a few people. But, as the protests continued, hundreds of thousands of people came in and now the protests are going on a daily basis. The protestors have occupied the area of Shahbag and refuse to go to home at night. The protestors are committed to see justice achieved and won’t leave Shahbag till every last war criminal is hanged!

Some of the popular slogans at the protest rallies are: “Joy Bangla!” (Victory to Bengal!); “Agun Jalo” (Light the fire!); “Kader Mollah Tule Nebo Tor Kollah” (Jamaat and Islam made in Pakistan). Today is the 5th day they are protesting in the streets, and there’s no sign of their going home! There is no one political party or organization leading this rally and from all appearances it seems to be a spontaneous rally led by the youth of Bangladesh. It is fantastic times we are witnessing with the next generation of Bengalis beginning to finish the revolution left unfinished by their fathers.