On the Garment’s Workers Struggle in Bangladesh 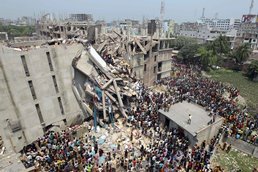 The garment workers in Bangladesh are up in arms against the cronic exploitation and mistreatment meted at them by the garment bosses. The tipping point was reached when the 8 storied tall Rana plaza collapsed killing several hundreds of worker’s families living there. Already reports are coming out involving workers attacking textile factories burning them down.

Bangladesh has been tense since the Shahbag uprising which mobilized students and a large section of the progressive petty bourgeois intelligentsia for the trial o war criminals responsible for crimes against humanity during the 1971 liberation war. Soon after the movement had began, workers struggles emerged after the disastrous fire in the Tazreen garments factory which used to supply to Wal Mart. The garment worker’s movement has gained a new vigor, aided by the disintegrating pre-revolutionary political situation.

The garments industry – an industry steeped in brutality:

Bangladesh’s economy is dependent entirely on the most shameful exploitation of it’s poor. This reflects clearly upon the condition of garment workers which has been exposed by the deadly disasters plaguing the sweatshops which dominate the industrial landscape of bangladesh. The garments industry is one that has been historically notorious for the exploitation of cheap labor starting from manchester’s cotton factories in the 19th century and to the sweatshops of bangladesh of this century. The textile industry in Bangladesh remains a labor intensive one where profits are based upon reducing as far as possible the cost of employment, including safety for workers.

In this context it is very important to note that the bulk of the 3 million workers employed by the industry are women workers. The bosses prefer employing women workers due to their particular skills in sewing as well as difficulties in organizing for struggle. The latter is the main reason behind the preference for women workers in this industry. It is the desire of the factory owners for control and discipline over the workers under their employ which is indispensable to allow for the vicious exploitation which is imposed upon their workers.

The importance of the industry and vested interests :

The garments industry alone accounts for 70% of bangladesh’s exports and 10% of it’s GDP. This ‘economic strength’ is sought on the basis of minimum wages of as low as rs. 1700 *( $34) per month. It is no surprise then that every major textile and garments producer is seeking more investments into bangladesh to perpetuate the exploitation of it’s people. Equally unsurprisingly, many major international retail companies led by the likes of Wal mart have used Bangladesh as a preferred sourcing destination. Of late, this ‘favorable’ situation has attracted among others, heavy Indian investments into the garments sector, attracting up to $600 million *( out of a total of $935 million dollars of investments ) last year alone.

Apart from major foreign interests, there are powerful politically linked indigenous capitalists who run the majority of the 5100 garments factories in Bangladesh. The Rana plaza at Savar belonged to one such garment oligarch, Sohel Rana. Politically, he was a leader of the youth wing of the Awami League which is the ruling party of Bangladesh. These companies are by and large dependent on exports to advanced countries primarily the USA which corners the lion’s share of Bangladeshi textile exports.

Bangladesh’s garments industry is a major beneficiary of proletarianization which has been brought about by, among other things, ecological terror imposed by India through it’s dam building *( by blocking the natural flow of water from rivers across the border thus drying many rivers in eastern and western districts of Bangladesh) and domination over Bangladesh’s sovereign EEZ (through holding key strategic islands near the Bangladesh border and sealing off direct access to the bay of bengal). Indian capitalism has played a vital role in ruining bangladeshi agriculture in these two ways. In addition to that, India has played a key role in providing political and military security to the ruling government in Bangladesh which has been of critical importance in defending this most vicious impoverishment in the Bangladeshi countryside. We see the results of this proletarianization in the deaths in the garment sector disasters.

It is the combination of various economic and political factors together with the context of proletarianization of bangladeshi society which has made the bangladeshi textile sector the second largest in the world, second only to the likes of China.

One of the highlights of the movement of the garments workers is it’s spontaneity. The norm of most struggles of textile workers in bangladesh hitherto has been to conduct wildcat strikes against their bosses. A nationwide strike too has been undertaken before, but by and large, the strikes of garment workers have been sporadic and spontaneous. Notable instances have been the strike of textile workers in 2006 and again around 2009 following the soldier’s mutiny. Among the demands made by the workers, the chief among them have included fair wages, decent working conditions and dignity of work. It is notable in this context that most of the 3 million workers employed in the garments industry are women workers. This is partly so as a deliberate policy of the garment factory owners who take advantage of the perceived weakness of women workers and the relative difficulties of organizing them politically and within trade unions to control them.

The nature of the present wildcat general strike has been characterized by ‘plebian anger’ directed against the very means of production in which they work. The first object of anger for the workers have been the garment factories themselves. Soon after the tragedy at Savar, garments workers have burnt several factories in protest. This action has been reminiscent of Marx’s description of the initial period of struggle by the proletariat in the Communist Manifesto : “They direct their attacks not against the bourgeois conditions of production, but against the instruments of production themselves; they destroy imported wares that compete with their labour, they smash machinery to pieces, they set factories ablaze”. However, unlike the primitive workmen of the mid 19th century that Marx described, the garments workers aren’t interested in ‘restoring the abolished status of the medieval workman’ but in achieving higher standards of welfare and better conditions of work !

This combination of plebian anger with a more advanced trajectory of struggle is a potentially revolutionary combination which can open the way for further more advanced struggles in the near future and gives the garments workers’ fight immense importance in the socio-political landscape of Bangladesh. What is severely lacking in this picture is the presence of an organized revolutionary force which can channelize this raw energy and lead the workers through more advanced tactics in their battle against the viciously exploitative garment bosses and their imperial protectors.

At the same time, the nature of the industry compels us to assume an internationalist perspective for the worker’s struggle in Bangladesh. We must be ready to form a solidarity of textile workers and retail trade workers in india and the US respectively to support the struggle of the workers in Bangladesh. Support from the Indian working class is critical for the struggle in Bangladesh, as it is Indian capitalism which has through it’s agencies ensured the political domination over Bangladesh which has made the exploitation in the garments industry possible. Likewise, solidarity from workers in US retail companies particularly those like wal-mart and others are critical in strengthening the fight in Bangladesh and thwarting the chain of capitalism which runs from Bangladesh to the Americas and Europe.

Demands to put forth:

The struggle of the garments workers reveals all that is corrupt and exploitative about capitalism in Bangladesh. To fight this system, we must place forth demands which correspond to the deepest needs of the workers. A gamut of transitional demands must be built in order to give a consistently revolutionary direction to the struggle of workers.

1) Compensation for all aggrieved workers and punishment for the garment bosses :

The most pressing immediate struggle aims immediately at the compensation for the workers who have lost life and limb due to the factory collapses at Rana plaza and Tazreen garments. The government must be pressed to give immediate compensation to the workers and their families not only to cover their health costs but to cover loss of prospective loss due to loss of income. In addition to this, the owners of Rana Plaza and Tazreen garments must be brought to book for their criminal negligence that has resulted in the death of nearly 500 workers.

2) A guarantee for decent working condition and labor practices :

The core of the struggle of garments workers is to achieve decent working conditions including proper safety in factories and a living wage. The workforce in Bangladesh is notoriously underpaid and ‘cheap’. This situation must be alleviated by the immediate implementation of a law guaranteeing a minimum living wage which covers the basic needs for a family of 4 and which would be adjusted to inflation and cost of living index. With each rise in inflation there must be a proportional rise in the living wage.

3) Nationalization of the garments industry :

Private garment factories both local and foreign are responsible for the worst labor practices in Bangladesh. But they get away with this because of their political protection. The only solution for destroying this vicious matrix of exploitation that characterizes the Bangladeshi garments industry is to nationalize the industry and place it under worker’s control. This is a precondition for any real advance in decent working conditions.