On the Events of April 30 in Venezuela 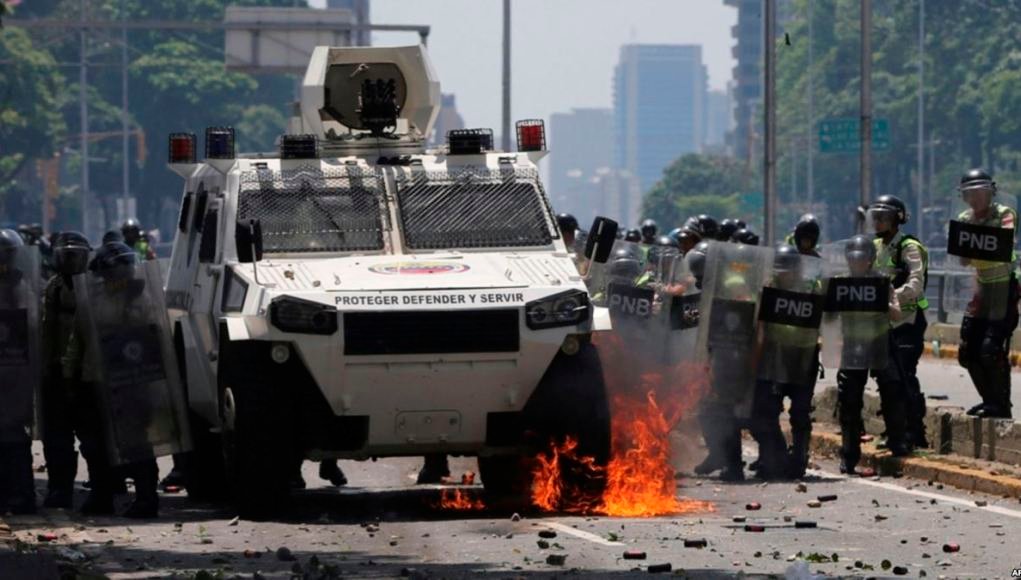 1- There was an attempt of a coup d’etat in Venezuela led by Guaidó in alliance with Trump, Bolsonaro, Duque and Co. trying to take an air base with the support of a sector of the military and calling for the support of the Venezuelan masses.

2 – Maduro dictatorship is hated by the Venezuelan masses due to the disaster to which this bourgeois and corrupt regime led the country. There is nothing progressive about Maduro. It is a dictatorship commanded by the bolibourgeoisie (big Bolivarian bourgeoisie that emerged under the shadow of the Chavista regime) which remains in power due to strong repression against the masses. Hunger, poverty and elements of barbarism in Venezuela are the result of twenty years of Chavism. That has nothing to do with socialism, it is decadent capitalism as in other countries across the planet.

3 – The attempt was due to imperialism decision to topple Maduro. Not because Maduro has an anti-imperialist stance. The transnationals exploit Venezuelan oil in partnership with the Venezuelan state, just as in Brazil. Trump decided to depose Maduro to prevent Venezuela from exploding into a new caracazo (NT: mass upsurge against the regime held in Caracas in 1989) against the government without anyone’s control.

Once again, the imperialist tactic was revealed: to divide the Venezuelan Armed Forces, to replace Maduro by Guaidó keeping the bourgeoisie and the military’s control.
There is nothing progressive about Guaidó’s coup. A pro-imperialist military coup would solve neither the economic problems of the masses caused by capitalism nor would it guarantee democratic freedoms for the Venezuelans. It is not by chance that Guaidó always seeks an alliance with a military sector. It is not by chance that he is an agent of Trump, supporter of all kinds of dictatorship across the world.

We reject the coup d’etat attempt led by Guaido, a representative of imperialism and the Latin American right-wing.

4 – A sector of the masses, taking advantage of the division between the military sought to challenge directly and heroically the repression around the Carlota air base. It will remain for Venezuelan history the criminal scene of the armored military vehicle of Maduro’s troops passing over unarmed demonstrators. The dictatorship drowned in blood the beginning of a rebellion.

We want the Venezuelan masses to overthrow Maduro, not a pro-imperialist military coup. We do not support at all Guaidó’s coup attempt, supported by Trump, Duque, Bolsonaro and Piñera. Instead we support the masses in their struggles against Maduro. We stand by the workers fighting against repression.

5 – The Guaidó’s coup, apparently was defeated, although there are possibilities that this process is not finished. Guaidó fled, Leopoldo Lopes hid in an embassy, in a cowardly way. Those who tried to challenge the repression were the masses, not these puppies of Trump and Bolsonaro.

The Venezuelan masses were not victorious. Who won once again was Maduro’s hated dictatorship. And the repression of Maduro will target the people, not the bourgeois pro-imperialist opposition.

6. It is necessary to continue fighting against Maduro and to build a workers’ leadership independent from both Maduro dictatorship and the imperialist option: Guaidó and his backers.

Throughout the world, we will fight against the reformist “left-wing” who will welcome the “victory” of Maduro. Yesterday it was not the masses who defeated the imperialist coup as in 2002. It was Maduro’s murderous dictatorship. This time the workers and the Venezuelan people did not take action to defend who they consider to be their government. On the contrary, they tried to use it to fight the murderous dictatorship of Maduro. This reformist “left-wing” now carries another bloodstain, with the image of the armored vehicle running over unarmed demonstrators.

6-
– Maduro Out! Down with the Dictatorship’s Murderous Repression!
– No Support for Guaidó, Trump, Bolsonaro and Duque. Hands Off Venezuela!
– For Free General Elections!
– For the Venezuelan People Right to Food! Expropriation of Food Production and Trade networks! Prices’ Freeze!
– Against Decaying Capitalism in Venezuela! In Defense of the True Socialism of the Workers!
– For a Workers’ Government that Expropriates the Transnationals and the Bolibourgeoisie!