Neither Maduro, Nor Guaido/Trump! For a Workers’ Third Way! 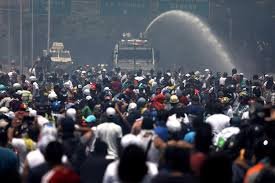 The U.S. imperialism and his allies tried to carry out a coup d’état in Venezuela on April 30, 2019.

The plot did not work as top generals did not join.
The self-proclaimed President Juan Guaidó and the bourgeois oppositionist Leopoldo Lopez fled away.
Then working people held 140 protests against the dictatorship across the country.
Protests followed on May 1.
U.S. imperialism and Juan Guaidó do not want a people’s uprising as it might go out of their control.
Instead they want an agreement with top officials to oust dictator Nicolas Maduro and keep an authoritarian regime totally in line with America.
CSP-Conlutas opposes both Maduro’s dictatorship and U.S.-backed Juan Guaidó.
CSP-Conlutas stands for a third way, a worker’s and people’s alternative to end hunger and poverty and take Venezuela economy away from capitalist crisis.