On the evening of Saturday, November 28, five young people were brutally murdered in the car they were going to the Lagartixa community in the Complexo da Pedreira in Costa Barros, Northern Zone of Rio de Janeiro.

The victims were machine-gunned after returning from a walk in the Madureira Park. Carlos Eduardo Esteves Domingos (20), high school student, Wesley Castro Rodrigues (25), construction workers, Cleiton Correa de Souza (18) and Roberto Souza Penha (16), who had just been admitted to the Young Apprentice program, were executed with over 50 shots fired by the Military Police of the State of Rio de Janeiro.

In the same month in 2014, Haissa Motta (22), was also murdered. Lucas de Jesus Paes (17), was executed in October for carrying a hydraulic jack that was “mistaken” for a rifle. The 10-year-old boy Rafael de Jesus Ferreira was shot in the head by his back, in the Alemão Community. The boy was going to buy a ball.

These brutal murders have in common the same brand: the dead are black, poor and from the outskirts. It could be an unfortunate coincidence, but it’s not! The killers have names, the dead too! The killers wear uniforms, the dead have color, their families now suffer the same pain.

According to the Human Development Report (PNUD 2005), “being black, young, male and single means to be a prime target of lethal violence in Brazil”. This statement is based on death certificates of the health system.

The Military Police of Rio de Janeiro State, according to the Brazilian Forum on Public Security is the most lethal in the country. They killed 3.5 people by 100 thousand inhabitants, due to any police intervention. The statistics do not lie. Even before the end of 2015, Rio de Janeiro champions the death toll by “acts of resistance” compared to 2014, according to the Public Security Institute of Rio.

The “Acts of Resistance”

It works this way:  when a police officer kills a “suspect”, he always declares it was in “self-defense” because the suspect reacted, endangering the lives of police officers and resisting arrest. When he arrives at the police station, the case will be registered as an “act of resistance” and the witness will be the very police officer who participated in the assassination. Any investigation is filed and the victims will go to the statistics as another figure.

This “act of resistance” is recorded on the report of 481 people killed between 2013 and 2014, according to data from the Public Security Institute of Rio de Janeiro. Although there is no law to regulate it, it is protected by the Article 292 of the Code of Criminal Procedure, a creation of the murderous hands of the entrepreneurs-military dictatorship (1964-1985) to favor the murderous hands of the military police in Brazil. By the way, the military police is a creation of the Brazilian dictatorship too.

Killing the poor should not be an ordinary event, stop the genocide!

This lame excuse of “act of resistance” was used by the four police officers who shot the victims as they reached the police station. In addition, they put a toy gun (amazingly, a toy!) at the massacre scene to accuse the youngsters of threatening the lives of the police officers and thus justify the more than 50 shots cowardly fired. A pathetic frame-up, contradicted by witnesses and a simple ballistics test.

The authorities statements were the most tragic possible. The so-tired security secretary of Rio, José Mariano Beltrame, said that the episode was “tragic and indefensible.” When asked about the police behavior that he commands, he said blatantly that it is a matter of being “out of character” and the Police Force does not act on these assumptions.  It is up to the reader to judge whether these words are consistent with the figures of killings  perpetrated by that police.

And the Rio de Janeiro state governor, Pezão (PMDB), said that this action has nothing of racism, during a meeting with businessmen in Rio. He said: “It’s not racism, it’s a mistake, and we fight mistakes,” pointing to a “recycling” project of police officers and to increasing the number of police officers. We answer: there is undoubtedly racism, there is death and there is genocide of the black youth in Brazil. 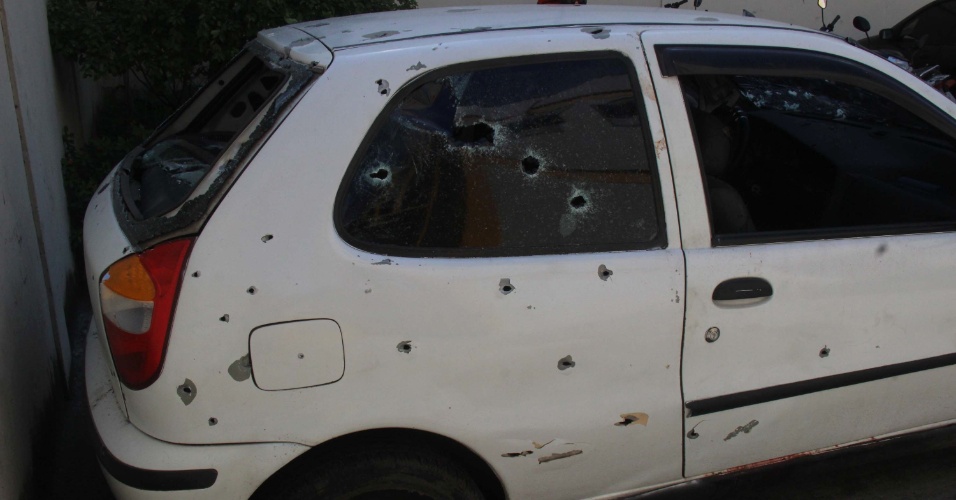 Car gunned down by the police in Rio

And there is criminalization of poverty, which is funded by the states and the federal governments. The militarization of the police and of life in communities – with the constant police raids and the establishment of the UPP [1] – is what drives this gear. Recycling the police, improving its functioning or training will be useful for them to do better and better what is being done: to kill the poor youth that resist in the communities! So I want demilitarization of communities now! For the end of the military police!

It’s not the first, but it can be the last

We, from the PSTU, stress it is one more case of racism and criminalization of poverty. And there is no capitalism without racism (Malcolm X). The families of these young people collect their blood drained on the gutters and protest against this massacre.

We, young people, black, from the outskirts, can reverse this situation with the active participation of the population and the working class as a whole. It is not utopia, but a race and class struggle and a goal to be achieved. We must, above all, cry with fists clenched, organized in the fight against any murder by the police. Let us not make this death turn into another Severino [2], let this death feed our fight, as we have always done. And so we will win!

[1] – UPP – Unidade de Polícia Pacificadora (Pacifying Police Unit): according to the Wiki – is a law enforcement and social services program pioneered in the state of Rio de Janeiro, Brazil, which aims at reclaiming territories, more commonly favelas, controlled by gangs of drug dealers. Actually, it brings more violence to the poor communities – the favelas – being responsible for many deaths of black people, like Amarildo, during the Fifa World Cup.

[2] – From a poesy by Cabral de Melo Neto, Morte e Vida Severina, translated by Elizabeth Bishop as The Death and Life of a Severino. The poem is a narrative of the journey of people who live in the northeastern areas of Brazil and flee from the drought – rather common in that region – either to the city or to livable lands. Severino is a common name in the Northeast.

Brazil | Against Bolsonaro, the path of class conciliation is a dead end

On the need for self-defense of the masses and armament

NATO – A SUMMIT OF THUGS

An Election Process that Starts With a Call for War, not Democracy!

Convoy to take delegation of workers to Ukraine

Two months of fierce resistance against the Russian invader

Interview with leader of the Social Movement in Ukraine

Only by supporting the Ukranian resistance can NATO, U.S.A. and European Union be defeated