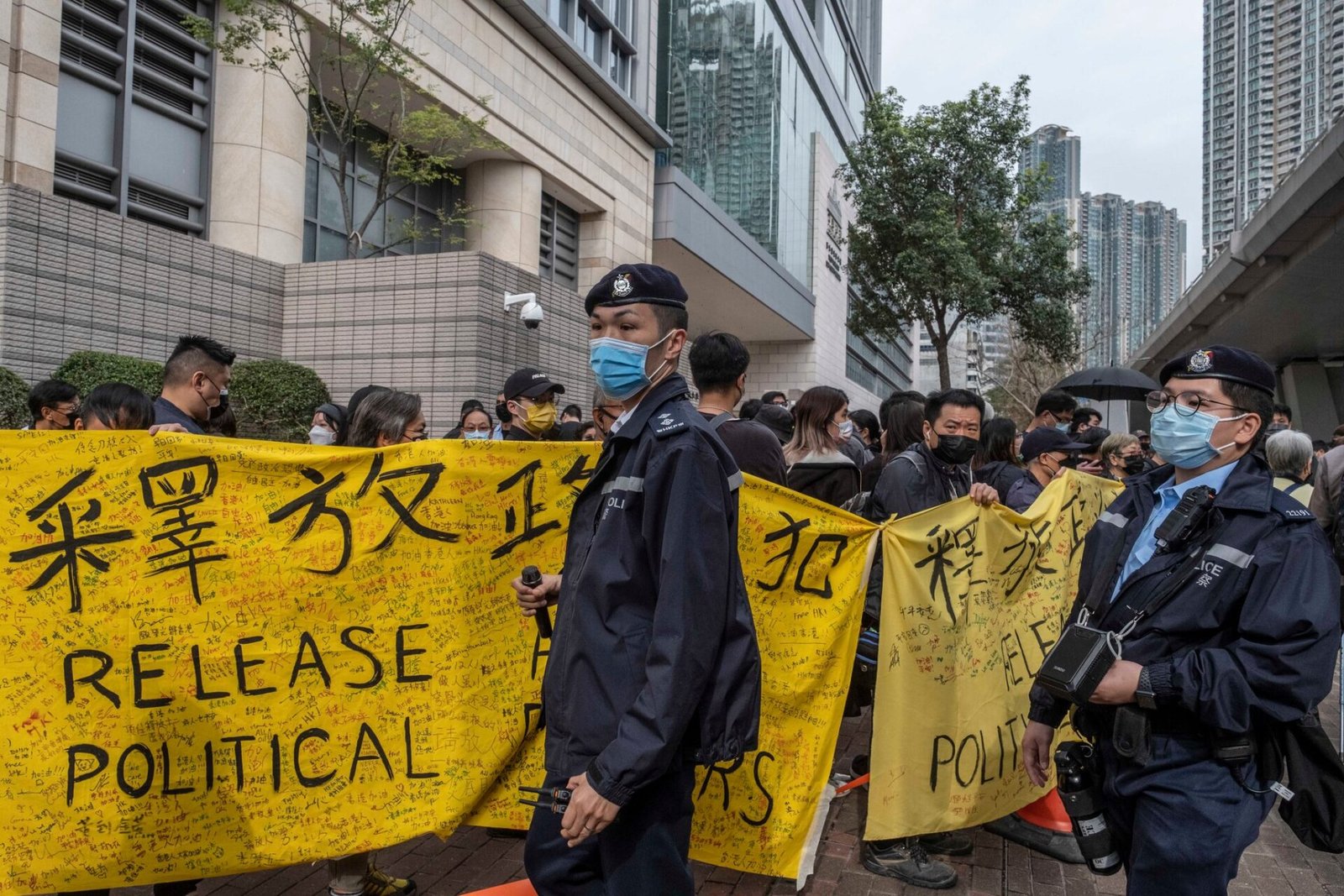 Ten pan-democratic opposition members have been convicted of organizing and / or participating in mass protests in 2019, ranging from 8 to 18 months for “unauthorized assembly” under Hong Kong’s Public Order Ordinance.

Five out of ten convicts had their sentences suspended for two years (kind of Sursis). Another five were immediately jailed. Among them is the leader of the Labour Party and founder of the Hong Kong Trade Union Confederation (HKCTU) Lee Cheuk-yan, sentenced to 14 months in prison.
Also sentenced to 18 months in prison is the socialist activist Leung Kwok-yung, popularly known as Long Hair because of his promise to cut his hair only after democratic liberties are guaranteed to the Chinese people which he made after the Tiananmen Square massacre in Beijing on June 4, 1989.
The National Security Law
In another criminal case, Long Hair and 46 other pan-democratic opposition members were arrested on February 28, 2021 on the basis of the new national security law imposed by the Chinese regime and enacted by the Hong Kong authorities on June 30, 2020.
They are accused of conspiring against the political order by organizing and participating in the primary elections that the pan-democratic opposition held on July 11 and 12, 2020 with the participation of 610 thousand voters to form a unitary electoral list for the election to the Hong Kong Legislative Council (Legco) that would take place in September 2020 but were postponed on the grounds of public health risks due to the coronavirus pandemic.
In addition to Long Hair, union leaders Carol Ng, president of the Hong Kong Trade Union Confederation (HKCTU) and Winnie Yu, president of the Hospital Union Employees Alliance, one of the nurse’s strike leaders who fought for the closure of the city’s borders to prevent the spread of the pandemic, were also arrested. Winnie Yu also had her contract suspended due to the lawsuit.
The trial is expected to start on May 31, 2021. The maximum sentence is life imprisonment. This is the largest ongoing lawsuit based on the new National Security Law. There are other processes underway against members of the pan-democratic opposition based on the same law.
Down with the National Security Law! Freedom for Political Prisoners! Down with the Dictatorship!
These trials are part of the Chinese dictatorship’s effort to criminalize popular protests and curb any political dissent. The dictatorship decided to carry out this offensive to avoid her likely electoral defeat in the 2020 September’s elections that were not held due to the pandemic. Part of this offensive is to change the electoral legislation in order to curb the participation of the opposition. The curbing of democratic freedoms is supported by the two major local banks: HSBC and Standard Chartered.
However, the local bourgeoisie is divided. While bankers support the dictatorship, media billionaire Jimmy Lai, also sentenced to 14 months in prison, supports moderate sectors of the pan-democratic opposition.
European and American imperialism criticizes the repression of the Chinese regime just to use the democratic struggle of Hong Kong people as a bargaining chip in their negotiations with the Chinese capitalist regime.
Among the working class and students, the majority stands for democratic liberties in addition to better working and living conditions (1). While part of the moderate sectors of the opposition announced the dissolution of their parties or withdrew themselves from the coalition that organizes unified popular protests for freedom, the working class has no alternative but to fight back both Hong Kong regime authoritarian drives, the Chinese dictatorship and the ills of capitalism.