Climate, Environmental Crisis and Coronavirus: Nature is not Passive 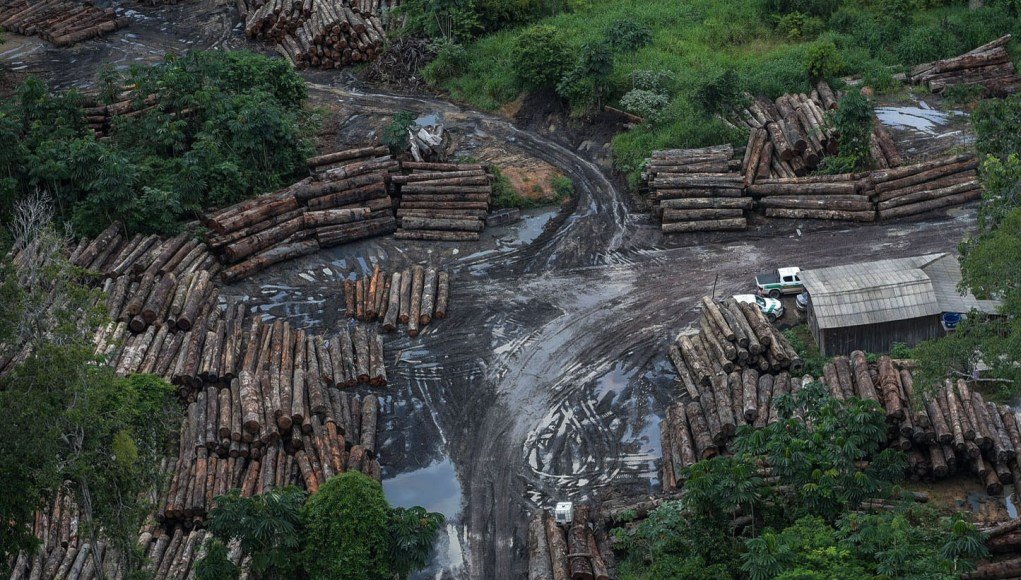 Nature’s reaction to the unhindered capitalist exploitation has taken place over the last decades and last years. There are many warnings about the consequences of global warming, which we already see and feel, like floods, droughts, storms, hurricanes, forest fires, etc… And thought we have already seen reactions to the spread of a series of zoonotic diseases, this was not the major concern, nor the most discussed and widespread. However this is the path of the reaction which, in a brief span of time, took the consequences to the world stage, and which is part of the same, and only, crisis. If we do not defeat capitalism it is possible that Nature defeats it, but it will defeat us along with it.

There are many explanations for the arise of Covid-19. Some consider the coronavirus God’s punishment for a society which does not respect his teaching, saying it had been predicted by the Bible. Other believe it is a natural event which was impossible to predict, and that nobody is to blame for it. And there are also denialists, usually the same that deny global warming, and, faced with the harsh reality of deaths, either say there ain’t no such thing as a pandemic, that it is a manipulation of public opinion, or say that a lot of people are indeed going to die… so what? And that we must fight it and keep the system running.

There are those who are guilty of Covid-19. And they are the same responsible for global warming

Coronavirus came from Nature, however it is not a natural consequence that it has reached humanity. Coming to human beings and transforming into a pandemic is a consequence of the degradation of one of the bases of production, of the source of resources, that is, of Nature. The irresponsible advance against natural resources has caused the recent epidemics humanity has gone through. And all of them are zoonoses, that is, originated on animals. This happened with Ebola (1969), Nipah (1999), SARS (2002), H1N1 (2009), MERS (2012) and now Covid-19 (2019). Covid had already been preceded by 5 declarations of health emergency since 2009[1]:

May 5, 2014 – international spread of poliovirus

February 1, 2016 – Zika virus and increase in numbers of microcephaly and other congenital malformations

May 18, 2018 – outbreak of Ebola in the Democratic Republic of the Congo

Studies prove that “counting with the originator of the current Covid-19 pandemic, science has already identified and isolated seven coronaviruses circulating among humans. All of them have jumped from animals to people in a little over a century, but the most pathogenical ones emerged over the last 20 years. There are still thousands of them in nature, the immense majority yet to be described.”[2]

Considering that zoonotic illnesses are responsible for 60% of the infectious diseases known and 75% of those that have evolved over the last decades, we could conclude that it is natural that we are contaminated. But that is not true. The pathogens of these animals cross the borders between animals and humans are spread quickly due to the devastation of forests and the increase in global warming.

Many scientists, including those of UNEP – United Nations Environment Programme – state that interference with nature and the loss of forests is responsible for the contact of human beings and wildlife, and the spread of viruses from animals to humans. This, along with wildlife trafficking, puts us more and more in contact with infectious agents.

“There have never been so many opportunities for pathogens to cross over from wild and domestic animals to people”, says the executive director of UNEP, Inger Andersen. “Our continual erosion of nature has left us uncomfortably close to carrier species – that is, animals and plants which house diseases that can be transmitted to human beings“.[3]

And with the devastation of forests and as a consequence of that, climate change is provoking the melting of the Polar Regions, which, according to scientists, have buried beneath meters and meters of ice latent, unknown germs, which are now being liberated by the thawing.

Is it necessary to interfere so much with nature?

Capitalism treats nature and the natural resources as potential commodities. Being interested solely in profit stops us from, within this system, having a sustainable, friendly relationship with nature. The logic of maximization of profit and the productivism which follows make evident that the idea of a “sustainable capitalism” is an illusion, and as a consequence there is no possibility of balance in this system.

Capitalism has as one of its foundations the idea that our relationship with nature is one of DISPUTE. That is, we must also dominate, separate ourselves from nature, and treat it as an inexhaustible source of resources, one that we utilize to produce goods without considering and analyzing its capability of reproduction and reaction. Engels already considered this question in his text of 1876, The Part Played By Labor In The Transition From Ape To Man:

“Let us not, however, flatter ourselves overmuch on account of our human victories over nature. For each such victory nature takes its revenge on us. Each victory, it is true, in the first place brings about the results we expected, but in the second and third places it has quite different, unforeseen effects which only too often cancel the first. The people who, in Mesopotamia, Greece, Asia Minor and elsewhere, destroyed the forests to obtain cultivable land, never dreamed that by removing along with the forests the collecting centres and reservoirs of moisture they were laying the basis for the present forlorn state of those countries. When the Italians of the Alps used up the pine forests on the southern slopes, so carefully cherished on the northern slopes, they had no inkling that by doing so they were cutting at the roots of the dairy industry in their region; they had still less inkling that they were thereby depriving their mountain springs of water for the greater part of the year, and making it possible for them to pour still more furious torrents on the plains during the rainy seasons. Those who spread the potato in Europe were not aware that with these farinaceous tubers they were at the same time spreading scrofula. Thus at every step we are reminded that we by no means rule over nature like a conqueror over a foreign people, like someone standing outside nature – but that we, with flesh, blood and brain, belong to nature, and exist in its midst, and that all our mastery of it consists in the fact that we have the advantage over all other creatures of being able to learn its laws and apply them correctly.”

Over the last years, the majority of the poor working population has been witness and victim to the irresponsibility of governments and the bourgeoisie of the planet, which take from nature ever more natural resources in an ever shorter span of time, finishing non-renewable resources and stopping renewable ones from regenerating.

The consequences of global warming and zoonotic diseases have been harsher with every year, reaching and killing millions of workers and poor people worldwide. However, as a response, those that dominate and concentrate most of the money of the planet, as well as their representatives in governments, have done nothing but environmental summits, with the goal of deceiving the majority of the population with empty ideas that are impossible to realize in this system, such as the decrease in the emissions of hothouse gases.

The destruction of forests and the contact with millions of viruses

The destruction of forests hastens global warming, bringing many consequences, and it also opens the way for viruses which bring diseases we did not know such as Covid-19. The more natural habitats are destroyed, the greater the chance that viruses cross over from animals to humans.

And this destruction is growing fasters. In 2018 alone, the tropics have lost 12 million hectares of forest cover, and amongst these were 3,6 million hectares of primary tropical forests, an area similar to that of Belgium. These forests store more carbon (which is responsible for global warming) that others and, once cut down, do not return to their original state.

2019 was no different. Brazil, for example has had a burst of woodcutting and forest fires in the Amazon, as a consequence of Bolsonaro’s policy of allowing mining, farming and logging in the area for the big industrial and agribusiness bosses. Forest fires happened in many other places across the globe, as a result of the long drought generated by climatic changes resulting from global warming.

And in 2020 the devastation goes on. In the three first months alone 1.202km² of the Brazilian Amazon were cut down, according to the National Institute for Space Research (INPE)’s satellites, which represents an increment of 55% over the same period in 2019. And in April 2020, according to information from the Deforestation Alert System (SAD), 529 km² of the forest were destroyed, the biggest amount of the last 10 years for this month. “With this number, the region had, comparing to April 2019, 171% more deforestation”.[5]

According to researcher David Lapola, the Amazon is “a huge jar of viruses” and adds that, by destroying it, we put our lives on the line.[6]

Are we going to allow the planet’s bourgeoisie, these irresponsible multibillionaires, to keep on destroying nature and our lives?

Whose life is at stake?

As we have seen in a series of studies, the consequences of global warming hit directly the poor, and the poor are those that see their lives turned to nightmares, or lose theirs or their relatives’ with floods, hurricanes, fires, droughts, etc..

With the coronavirus, things are no different. Although, as with global warming, they try to convince us that the consequences do not choose social class or race, we seen in practice that this is a big lie. The poor and the workers, and among them, the most vulnerable sectors such as women, Blacks and immigrants, are those who suffer and die the most.

While those that cause such calamities live in a paradise, spending their quarantine in their beach mansions and isolated farms which are luxurious in ways we cannot even fathom, we, the poor and the workers, suffer the consequences of their irresponsibilities.

And we risk not death through infection and lack of health resources, but also every other consequence such as unemployment, wage reductions, etc…

Besides, we cannot delude ourselves that the current owners of the planet, that is, the multibillionaire bourgeoisie, will learn something from the pandemic, then become goody two-shoes, create a more equal society and seek a more harmonious relationship with nature. Though they try to make us believe that, we know well that they will try to recover their profits on our backs and destroy nature even more.

Instead of resigning ourselves and believing in “pretty” words and in “Solidarity Corp”, we have to organize and prepare to take over control over society, removing the controls from those irresponsible who will, it is clear, lead us on a path of destruction along with nature.

Nature is no longer just giving out signals, it is reacting to destroy its enemy. But it has awareness of the class it must destroy, and the consequences of this reaction fall on our own class.

Those who can and must act with consciousness are we, the workers and poor people, who are the only one interested in building an egalitarian society, one that grows and develops with the exploitation of man by man, harmoniously with nature.