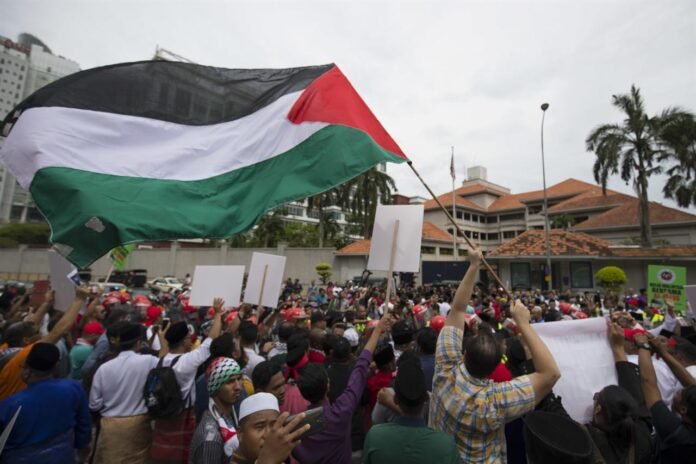 To the Palestinian people, and all workers, solidarity activists, trade unions and civil society organizations worldwide:
In light of the President of the United States’ announcement of their recognition of the city of Jerusalem as the capital of the Zionist Occupation State (Israel), we call upon you to take action and reaffirm the following:
1) The city of Jerusalem is the cradle of religions, a Palestinian Arab city and the capital of the State of Palestine
2) We reaffirm that defending our cause and struggling against the occupation is a right and not terrorism
3) We call upon the Palestinian people to rise up in defense of our cities, villages and holy places against the Israeli occupying forces and Israeli settlers
4) We call upon workers and solidarity activists in all parts of the world to refrain from dealing with the Trump’s decision, the world leader of extremism and racism, and reaffirm that the escalation of BDS campaigns against the Israeli Occupying State and its organizations is the best response
5) We thank all States around the world, who opposed this racist decision, and have remained committed to considering Jerusalem as a city under occupation, and ask them to recognize the State of Palestine
6) We call upon our comrades worldwide to organize days of anger and protests against the United States’ decision, and call upon trade unions in the United States to announce their position on the decision of their government, which we consider to be an escalation and an aggression against the rights of the Palestinian people, which are enshrined in international law
In conclusion, we call upon you to maintain a high state of solidarity and to expose the crimes of the Israeli Occupying State and the United States against the Palestinian people, to inform your public about them, and to file cases against war criminals, instigators of racism and perpetrators of violence.
PPSWU