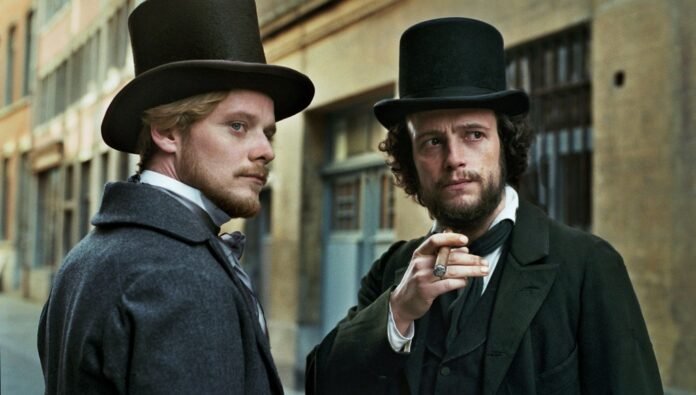 After several months of waiting, I could finally watch the film “The Young Marx,” by the Haitian director (based in France) Raoul Peck. It was not easy: its premiere in Brazilian cinemas was announced for last June but it did not happen (I don’t know why). It was not on DVD either, and on Youtube, the capitalism “hand” blocked all uploads in name of “copyright.”
By Alejandro Iturbe.

Finally, after “an international request for help,” a young comrade from Brazil living in Portugal (to who I am grateful) sent me a Facebook link to watch the movie. And I must say: the waiting and search were worth it.
The film approaches Marx’s life between 1842 and 1848 (between his 24 and 30). It begins with the closure of Rheinische Zeitung (in which Marx was a collaborating redactor) and his moving to Paris, where he meets and begins a cooperation relationship with the Anarchist leader and theoretician Pierre-Joseph Proudhon and his followers. Also, as a highlight of History and the movie itself, he meets Friedrich Engels (another young German, living in England,) and a friendship and theoretical-political relationship of common militancy begins, that lasts until Marx’s death (1883).
The movie then shows Marx joining the League of the Just in London ( an organization founded in the previous decade by the “utopian socialists” and Proudhonian,) and carrying out a theoretical-political battle, together with Engels, against these groups (especially against the German leader Wilhelm Weitling.) The film shows History until the moment in which Marx and Engels win the majority and transform the organization into the Communist League, for which they write a program (known since then as the Communist Manifesto).
To say it explicitly, I liked the film very much; an opinion that goes beyond the technical aspects, like performances, atmosphere, and rhythm of the story, which are really good, too. Particularly, I think Raoul Peck hit the target regarding the aspects he chose to approach History, eliminating the “mechanical” sensation that historical films many times generate.
The first merit is to present Marx and Engels as internationalist, revolutionary militants (as they were in real life). The rich and extraordinary production in the field of ideas, philosophy, and economy, is a guide to get closer to the working class of the time, and to build a political tool to serve the revolutionary task.
In that path, they combine the necessary unity of action with other political forces (at moments and for specific tasks) with the political battle against the ideas, programs, and methods of organization that they considered incorrect and surpassed.
This is what happens to the interior of the League of the Just, with their battle to turn it into the Communist League, even if it meant to break with the “utopian socialists” and Proudhonian.
At the same time, it shows Marx and Engels as deeply human, passionate for the women they loved; Engels’ contradictions with his class origin; Marx and his family’s deprivation and health problems; and the unbrakable friendship between both of them. The scene where Marx is shaking before the task of writing the Communist Manifesto and Engels backs him up and encourages him to write it together, is really touching.
I dedicate a final paragraph to Marx and Engels’ wives and the defense of their role in History. First, to Jenny Marx, that gives up a life of wealth and luxury in the German nobility to be the support that Marx needed and without which he could have never done everything he did. But not only: she had the intelligence to accompany in the debates and ellaborations of her husband and intervene in them prividing important ideas.
On the other, Mary Burns, Engels’ wife, young Irish worker based in Manchester, a free woman and “pure pepper,” capable of confronting the factory owner (Engels’ father) and be the nexus between Marx and Engels and the English working movement (she is the one that puts them in contact with the League of the Just.)
In moments in which it was not easy to be a woman, both of them are vital in History and deserve to be vindicated as essential characters.
The movie ends with the Communist Manifesto, and the film images clearly transmit this as the great legacy of Marx and Engels to the workers of the world. There was, of course, a long history afterwards, but it is valid to say that the core of History is still class struggle of the proletariat against the bourgeoisie, and the Manifesto trascended its time and echoes as the main task of today: “Workers of the world, unite!“